Deprecated: Function Elementor\Widgets_Manager::register_widget_type is deprecated since version 3.5.0! Use register instead. in /home/m9m1urbwleyl/public_html/shemfordpinjore/wp-includes/functions.php on line 5383

Deprecated: Function Elementor\Widgets_Manager::register_widget_type is deprecated since version 3.5.0! Use register instead. in /home/m9m1urbwleyl/public_html/shemfordpinjore/wp-includes/functions.php on line 5383

Guru Purab was celebrated at Shemford Pinjore with religious piety to mark the 552nd birth anniversary of Guru Nanak Dev Ji. Students conducted a special assembly. Speeches, poems and incidents from the life of the great guru were narrated by the Shemstars, highlighting His contribution towards promoting communal harmony, fraternal love, goodness and virtues among the commoners. Naturopathy Day is also celebrated on 18th Nov .The students were made aware of the drugless system of medicine  to prevent diseases by following a healthy and balanced diet and alerting  their life style. 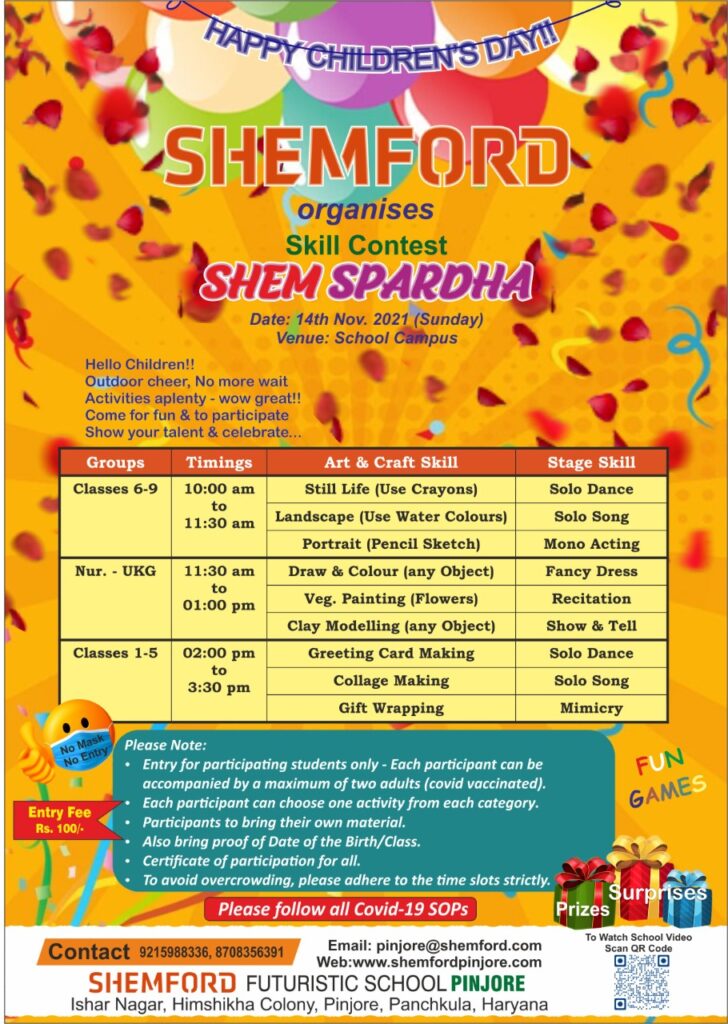 On the auspicious occasion of Rakshabandhan Shemstars celebrated the bond of love and protection   between brothers and sisters for a life time. Using their creativity they made beautiful rakhis and gifts for their siblings with their own hands. They also poured all their love in the heart warming voice messages that they recorded for their brothers and sisters. As Eco warriors Shemstars also, tied rakhis to plants and trees and pledged to protect and save the environment. Little Shemstars  had fun learning with an enticing story telling session about the purpose and traditions of this beautiful festival.  They made an Oreo pudding as their  little endeavour towards “Kuch Meetha Ho Jaye” to add more and more homemade sweetness to the celebrations. 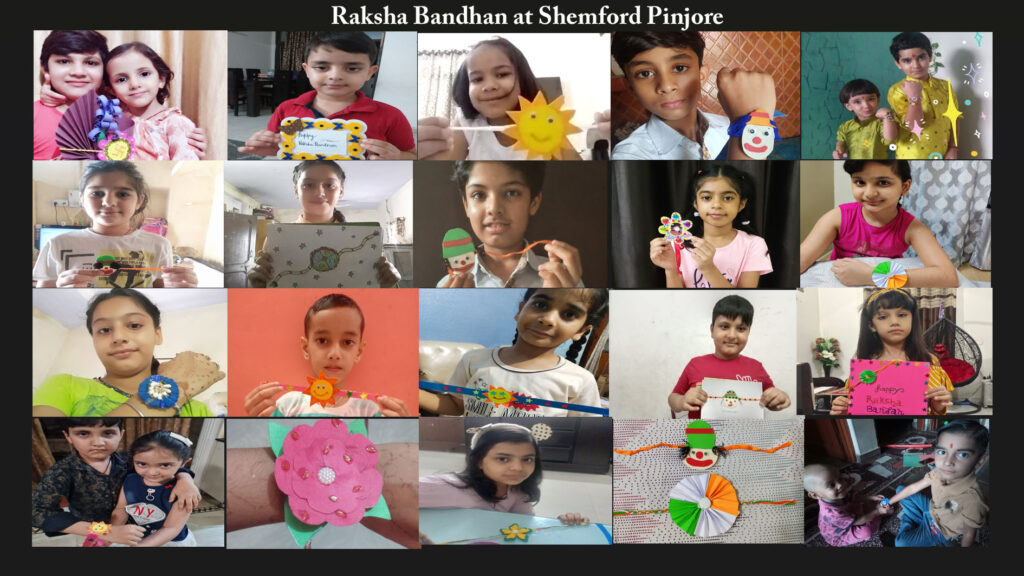 Mother’s Day was celebrated by Shemstars online on the 9th, with a special presentation. As Mother’s day falls on the second Sunday of the month, the Shemstars of Shemford Futuristic School, Pinjore participated in a variety of activities filled with love and gratitude to make their mothers feel special.

Mothers were made to feel like celebrities as they were interviewed by their children to get their views on different aspects of life. Students also sang songs for their mothers and together with their mothers danced to the beats of their favourite songs. Some young artists sketched portraits of their mothers. Students recited self composed poems and delivered speeches in praise of their mothers. The Role Reversal, mimicking each other was the highlight and most enjoyed activity. Shemstars of the Pre Primary wing prepared yummy pastries, fruit salad, snacks and desserts using the fireless technique of cooking. Shemstars made and presented to their mothers, gifts, from a wide range of options like cards, love boxes, photo frames, wind chimes, jewellery boxes, face masks, bouquets of origami flowers. The mothers also participated enthusiastically. They were overwhelmed with joy on their special day.

The Shemstars were also told about the importance of celebrating their mothers who undoubtedly are the most beautiful gift from God to a child. Dr (Mrs) Bimla Arora, Director, Shemford Futuristic School, Pinjore in her address said that the role of a mother is not limited to one ‘M’. Rather she plays the role of a mentor, motivator and magician who is the nucleus of the family, and more so, in these times of the pandemic the responsibility lies manifold on her shoulders. 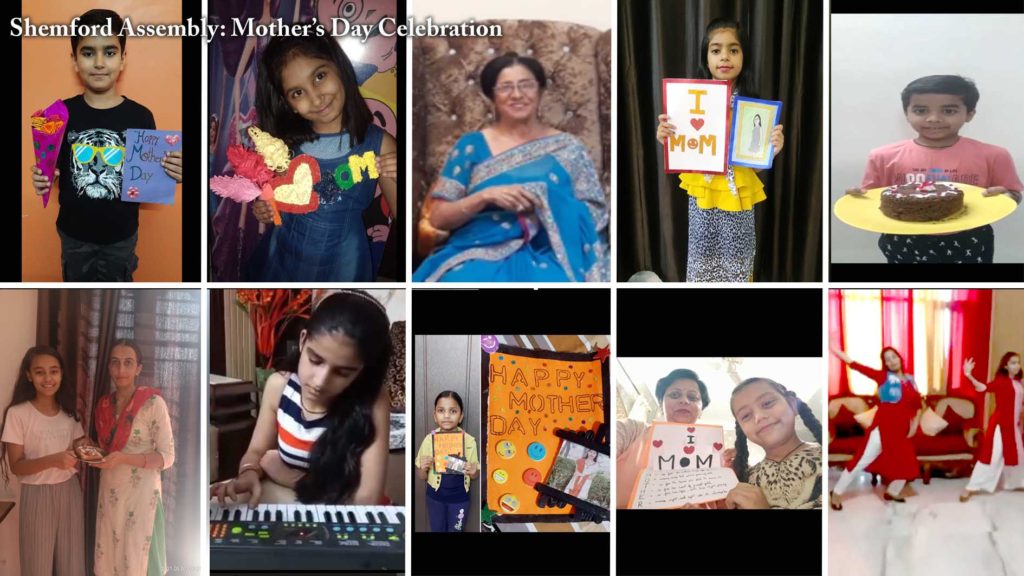 Shemstars celebrated with pride the National Technology Day online on 11th May, ‘21.

A very informative video explaining the significance of the day and the accomplishments of the country in the field of Science and Technology was shared with the students.

“It is imperative to instill the scientific temperament among the youth”, said the school Head, Mrs. Teenu Jolly. “We must educate the youth about the famous scientist of India, along with their contribution and motivate the children to get inspired”, she added.

A quiz based on National Technology Day was also conducted for all the classes. Students expressed their views on the topic, Technology – A Boom or a Bane. It was indeed a very lively and energetic discussion involving the thoughts and participation of each one present.

The students were very excited to know the scores and standing in the quiz. 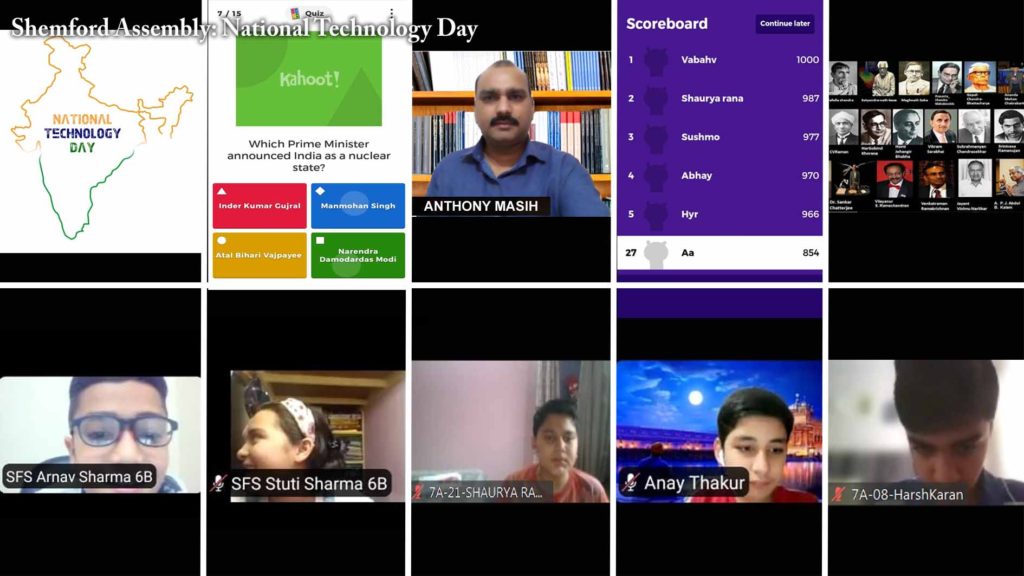 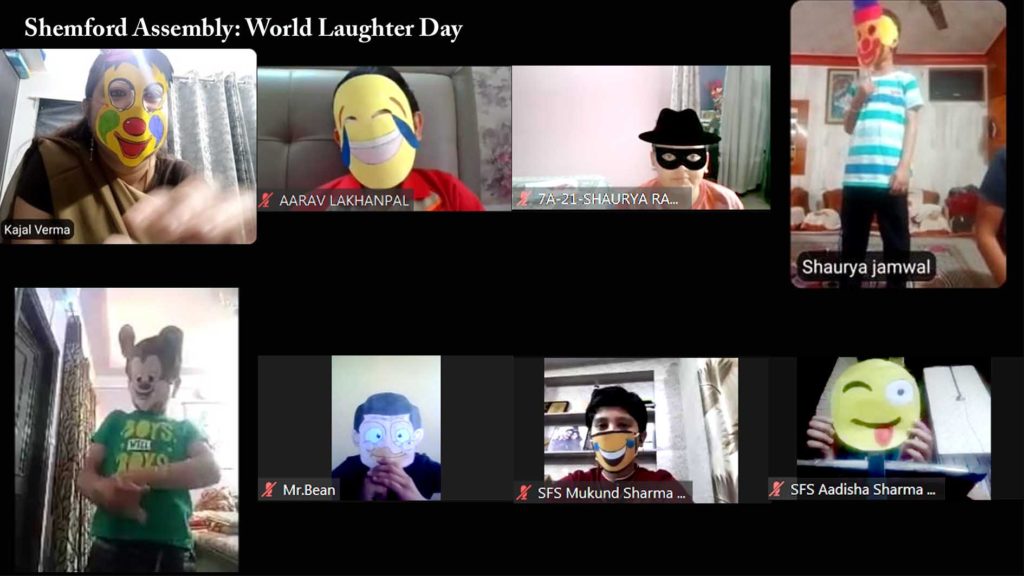 The International Dance Day was celebrated at Shemford Futuristic School, Pinjore. A special assembly was conducted online via zoom session to provide a common platform to the nimble feet.

The importance and relevance of the day was shared with the students. The Shemstars showcased their dancing talents both through live performances and recorded videos.

The students were also guided by their teachers about the precautions that they must take to keep themselves safe during the adverse times. The children prayed for the well being of all the people around the world. ‘We must celebrate life in all its wonderful hues by remaining positive even during testing times like these’ , said the School Head, Mrs Teenu Jolly.

On the International Day of Yoga, the Shemstars were motivated to make Yoga an integral part of their daily routine. Principal, Ms. Teenu Jolly reinforced the worldwide acknowledged fact that ‘Yoga adds life to your years and years to your life’. She also said that one should gain from the immense mental, physical and spiritual benefits that yoga brings to ones being.  The enthusiastic Shemstars enjoyed the Yoga session at home and shared the pictures of the same which were later uploaded on the school portals to applaud their efforts. 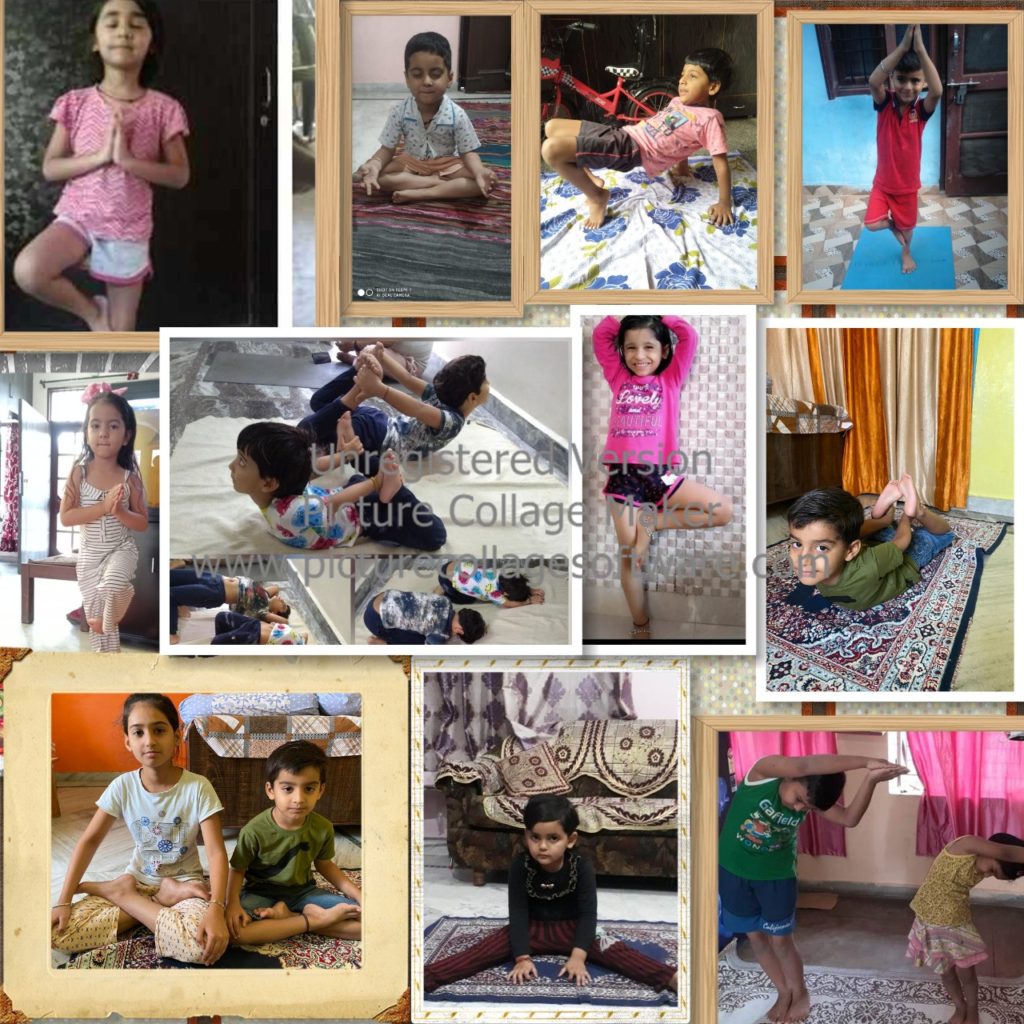 Shemstars celebrated Father’s day making every effort to make the day a special one. Their teachers shared ideas with them for making cards and gifts for their fathers. Apart from this the Shemstars also prepared goodies for their fathers on this special day. They also spent the day playing games and watching movies with their families. They enjoyed and captured their experiences in the form of pictures and videos which were later uploaded on the school websites to form everlasting memories. 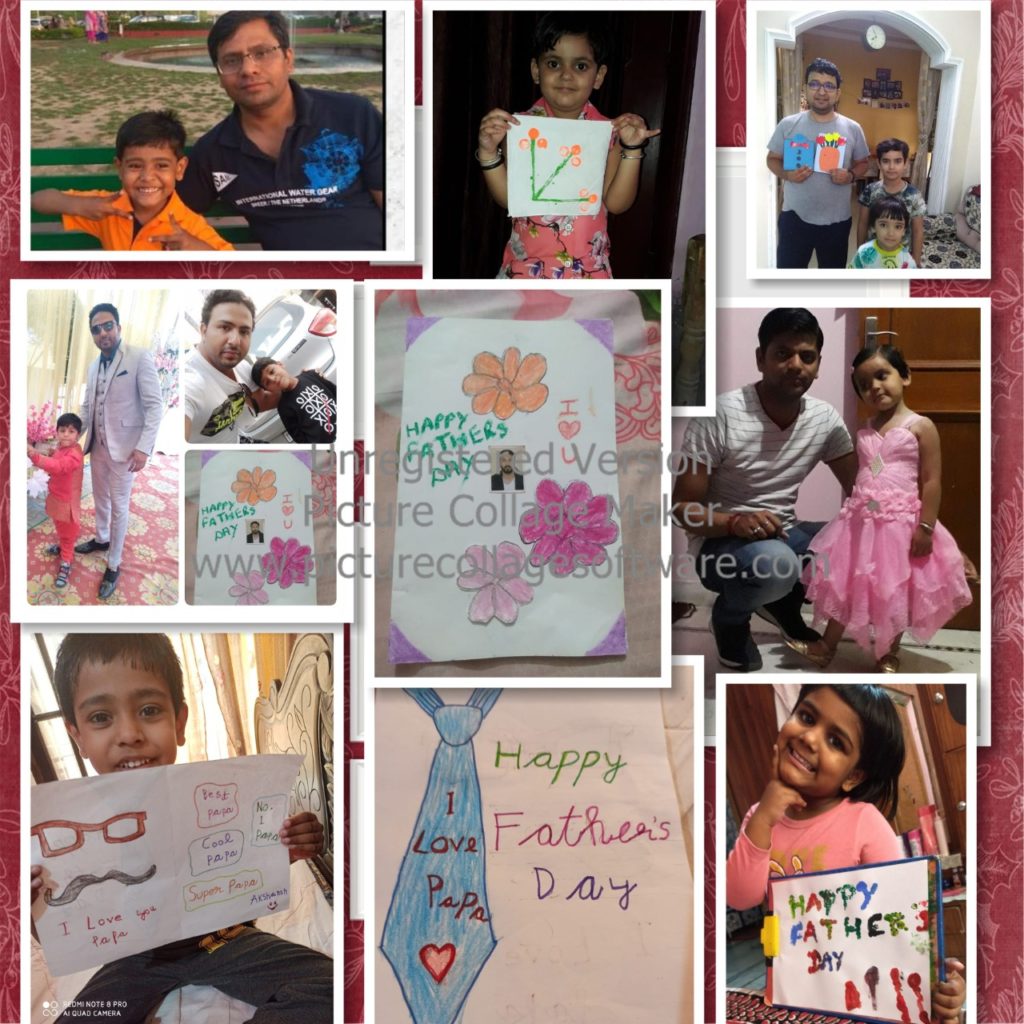 The students of Shemford Futuristic School, Pinjore brought laurels to the school with meritorious results in class X and class XII board examination.

The Shemstars who scored 90% and above were also applauded for their meritorious results. In English, Ayushi Garg topped the list with 96% marks followed by Sujal Aggarwal at 94%, Bhavya Bhalla at 94%, Shaunak 93%, Mansi 92%, Anshita 91% and Shreyam, Harshit, Azra and Aakriti scored 90% marks.

The Shemstars made their alma mater proud with their performance in Mathematics. Shaunak Gupta scored as high as 99%, Mansi and Shreyam were at 98%, Riya, Yuvraj, Samiya, Parth, Maninder, Rhythm, Saanvie, Adarsh, Srishti and Saksham scored 95%, Sujal and Sarthak scored 94%, Bhavya 92%, Nikhil 91% while Maanik, Harshit and Anirudh score 90% marks.

The Science list was topped by Mansi with 98% marks while Shaunak, Riya, Adarsh, Sujal and Bhavya Bhalla scored 95% marks.

The Shemstars have well proved that they are tech savvy with their fabulous marks in Foundation of Information Technology. Mansi, Samiya and Shreyam scored 99, Yuvraj 98, Aayushi 97, Piyush and Ujjwal 96, Aayush Thakur and Nikhil 95, Aadarsh and Maanik at 94, Azra 92, bhawani and Rhythm 91 and Parth Garg scored 90% marks.

In class 12, Nishita Goyal topped the Science Stream scoring 91.8% marks while the Commerce and Humanities Streams were topped by Rishab Bansal, 86.4% and Natasha Singh, 88.2% respectively. Bhavesh Kumar and Janvi were at the second and third positions in the Science stream while Yuveraj Dhara and Aditi Kumari were close at heels with the toppers in the Commerce and Humanities streams As many as 33% students scored more than 90% marks in various subjects .

The Management, Principal and Staff congratulated the Shemstars on their brilliant performance.